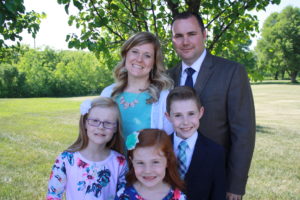 Pastor Chuck Nicholson was born in St. Joseph, Missouri. As a 15-year-old young man, Chuck called on the Lord as his Saviour and shortly after was baptized at Bible Baptist Temple in St. Joseph. Under Pastor Gary Williams’s direction, he surrendered to serve God in full-time service and committed to attending Heartland Baptist Bible College.
While at Heartland, Chuck met his wife, Amy. They were married in the fall of 2004 and moved to Flower Mound, TX, to serve at Grace Baptist Church under Pastor John Gillespie and Pastor Warren Johnson. During the nine years in Texas, he served as the Youth Pastor, worked in Grace Christian Academy, and God blessed the Nicholson family with three children (Chase, Natalie, and Mackenzie). In 2013, Chuck and his family returned to St. Joseph to work under Pastor Bill G. Marshall at Riverside Baptist Church.
In 2018, Northwoods Baptist Church in Bemidji, MN called Pastor Nicholson Pastor Northwoods, where he faithfully preaches the Word of God. Pastor Nicholson is excited about the tremendous potential of the church. He leads the church to continue to serve as a lighthouse in Northern Minnesota and around the world.